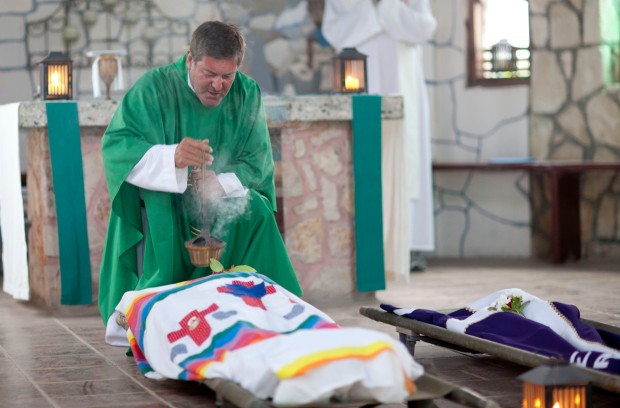 Born in 1953, Frechette graduated from Assumption College in Massachusetts with degrees in math and philosophy. He next attended St. John’s University in New York and studied theology as a seminarian, being ordained a priest in 1979. After a few years as a parish priest in Baltimore, he met Fr. William B. Wasson, founder of Nuestros Pequeños Hermanos (NPH), Spanish for Our Little Brothers and Sisters, and worked in Mexico in 1983 at an old hacienda that had been converted to a home for nearly 1,000 orphaned and abandoned children. As a priest and administrator, his next calling was to Honduras to help establish a second orphanage for NPH.

Mother Teresa’s Sisters of Charity in Haiti directed Frechette to the next turning point in his life. The sisters were caring for babies born of dying mothers, frequently sick with AIDS. Many of the babies did not survive, but those who did needed care, love and a place to live. Wasson and Frechette visited the poor country and children’s hospice and decided to begin an orphanage there. Today, Nos Petits Freres et Soeurs, French for “Our Little Brothers and Sisters,” survives amidst political chaos, economic disaster and uncontrollable crime. Despite the obstacles, Frechette is determined to make a difference in the lives of children. During particularly violent years of embargo, when it was suggested that the NPH staff leave Haiti, Frechette said, “How could we leave the children? What kind of shepherd would leave when the wolf comes?”

Making a difference meant going back to medical school to learn how to minister to the children’s physical needs, which resulted in his medical degree in 1998 from the New York College of Osteopathic Medicine, and becoming a general practitioner licensed in New York and Florida. “The poor people have scant access to medical care; even if they are lucky enough to get evaluated at a clinic, both scarcity of medicines and their relatively high prices prevent their getting treatment. Our own working conditions, especially in the poorest areas of Port-au-Prince, are tragic and are deplorable. We have little water, no electricity, few medicines and supplies,” states the doctor-priest.

For over 30 years, Fr. Rick’s duties included overseeing NPH Haiti’s St. Damien 240-bed pediatric hospital, which provides long-term care to critically ill children and outpatient services to children and adults each year. Also Fr. Rick managed the operations of the NPH residential homes, schools and various community service programs. He has since handed these duties over to Haiti staff, who he has mentored over the past years.

In 1998, Fr. Rick founded the St. Luke Foundation, which creates dignified jobs in social service fields. These extensive programs now include over 30 street schools, water delivery to the slums, hospitals and clinics and burying the unclaimed dead from the city morgue.

Fr. Rick remains fully committed to advise, support and help in any way requested, the leaders of NPH Haiti and St Luke Foundation. He is confident in their zealous and proven ability to take up full leadership of these programs. as Haitians with good hearts and a deep convictions about what is best for their country.

Fr. Rick remains the acting President of NPH Haiti, overseeing an extensive array of programs. He also serves as the Ethical Medical Advisor for NPH International. 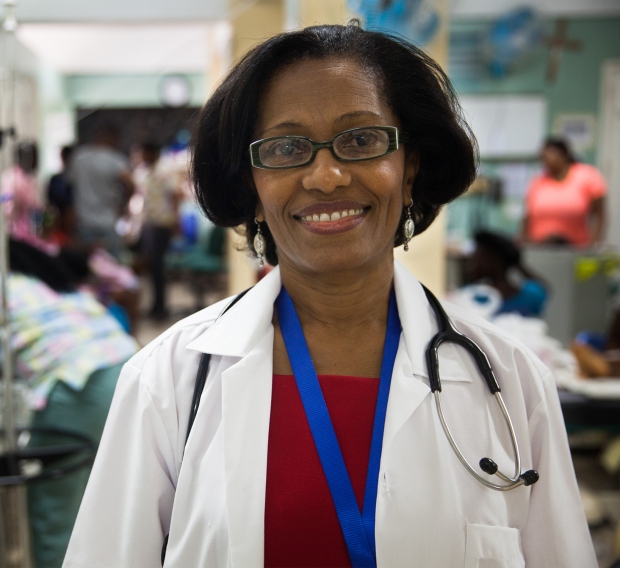 Dr. Jacqueline Gautier is a pediatrician and graduated in 1981 from the Faculté de Médecine et de Pharmacie, Port au Prince, Haiti. She specialized in Pediatrics at the Hôpital de l’Université d’Etat d’Haiti from 1982 to 1985. She then spent one year fellowship in Infectious Diseases at Duke Regional Medical Center, USA, in 1986.

From 1986 to 1988 she was the chief of the pediatric department of Hôpital Albert Schweitzer, Haiti. Afterwards she served as a board member for this hospital for seven years.

After five years in private practice in Port au Prince, she became the first medical director of St. Damien in 1993, helping Fr. Rick Frechette, then current General Director, transform gradually a hospice for dying children to a well-known pediatric hospital for the vulnerable families in Haiti.  In 2005, she established the HIV/AIDS department of St. Damien with funding from PEPFAR.  The multidisciplinary team of this department cares for approximately 800 women and children receiving ART.  St. Damien also offers a PMTCT program for pregnant women infected with HIV. Today the HIV/AIDS department of St. Damien is a point of reference in the country as well as a training center for physicians from other towns of Haiti to expand pediatric AIDS management in the country.

Dr. Gautier teaches Infectious Diseases in Pediatrics at the Faculté de Médecine et de Pharmacie, Université d’Etat d’Haiti . She is also currently the president of the Sociéte Haitienne de Pédiatrie:  the Haitian Pediatric Society.  Dr. Gautier became the CEO/Director of St. Damien in April 2012. Under her leadership St. Damien opened a residency program in September 2013 in collaboration with Hôpital Bernard Mevs/Project Medishare and the Université of Notre Dame d’Haiti to train a new groups of pediatricians ready to face the challenges of health care for Haitian children.