I wish to share with you all the beautiful story of Lucien*. It was Saturday, September 12th, the day of the Holy name of Mary, and Father Rick Frechette and I weaved through crowed streets on the backs of motorcycles in route to help run a clinic at St. Joseph’s with the Missionaries of Charity, also known as the Sisters of Mother Theresa. As we neared the church in Croix des Bossales, we came upon a bustling marketplace, full of people selling and trading. The crowd was so thick it blocked our way. It seemed like there was not an inch of space; a pin thrown into the air would surly have struck a pedestrian and not the ground. This same marketplace dates back to France’s rule in Haiti and was once a slave trading outpost. We gathered our courage and plunged into the crowd on foot elbowing and nudging our way to the gates of St. Joseph’s. We went from the crowded streets to a crowed courtyard as the church’s exterior was lined with the sick and destitute. I was amazed at their numbers and baffled at how they managed to part the sea of people we had barely just been able to swim through to get there.

We gathered with the Sisters and prayed over all the pain and suffering and asked for God’s guidance in the work before us. Then we began, washing, cleaning, and bandaging wounds of every kind. Father Rick, being a medical doctor, spent most of his time seeing children and diagnosing chronic diseases, malaria, malnutrition, tuberculosis, hepatitis, etc. The line to receive care is long and it takes a while, but eventually a man walks up with a very sick child and places him before us. This sick child’s name is Lucien. Father Rick’s face fills with concern upon seeing him. I immediately notice how skinny the child is and that he is non-responsive and close to death. We are too late perhaps. I see in Fr. Rick’s eyes a small glimmer of hope. A hope that is not rooted in science but rather in faith. As a doctor, he thought that Lucien wouldn’t make it, but as a priest, he knows that all things are possible through Christ.

We got one of the Sisters to put in an IV, which in itself was a challenge as the dehydration was so severe that it seemed impossible to find a vein on Lucien. Father Rick told me to watch carefully the skill of the Sister. I was impressed not only by her skill inserting the needle in one of the veins on the child’s head but by her focus and compassion while she was doing it. She was devoted to God asking Him for His assistance, and towards Lucien, recognizing how every life is sacred. This is the same devotion I always see in the other Sisters while they spend their early hours in front of the Blessed Sacrament.

Once the needle was inserted, Father Rick had me squeeze with all my strength so as to force the fluid from the IV into Lucien as fast as possible. If we couldn’t rehydrate the child, he surely would die. As the first bag started trickling life back into Lucien’s body, Father Rick stepped out to arrange to take him to the NPH Haiti St. Damien Pediatric Hospital. The first bag emptied, a second was attached, I looked at Lucien and his father, my heart was aching for them. A father watching his baby die in front of him, words eluded me. I felt totally useless as I prayed that the liquid would revive this shriveled child. I asked Lucien’s father if there was anything else I could do, as if I had the ability to do something! I immediately thought, “I’m truly a fool”. But there are moments that only afterwards you realize that it wasn’t you speaking, but the Holy Spirit. At my request, his father asked me, “Can you please baptize him?”. I was caught by surprise because that was actually the only thing I was really able to do. I did not hesitate. I took some water in my hands and after praying with him and the Sisters, I baptized Lucien. It was a very moving moment and my heart quietly cried to God, “he’s not only your creature now, he’s your son! Please, have mercy!”

Right after the baptism, Father Rick came back and handed papers over to Lucien’s father telling him that there is no time to waste and that he must run Lucien to St. Damien, but the man had no means of transportation and it would of taken hours before one of our ambulances could have come to pick them up. So Father Rick asked Father Hugo Esparza, a Passionist from Mexico who was visiting us, to accompany them to the hospital by motorbike. Imagine the scene on the motorbike. A driver, a father holding his sick child, and then almost falling off the back, a priest holding an IV back high above his head winding through roads full of holes, traffic, garbage, and dust.

Once we finished visiting all the other patients, we headed back to St. Damien. I ran into the emergency room to see Lucien. He was pale and unconscious, still sitting on a chair because the emergency room was too full and there was no bed available for him. I asked the doctor about his condition, and she said he will probably die in the next few hours because he had septicemia. I looked in his father’s eyes and I saw a mixture of fear, desperation, and loss. Again I quietly cried to God, “Lucien became your beloved son today, please have mercy!”

After sunset I returned to the ER, and as I walked in, the doctor gave me a nod and said, “He’s still alive”.  I found Lucien in a bed that had opened up since his arrival. His father was next to the bed exhausted and asleep. I quietly touched Lucien’s right hand and he grabbed my finger almost as if he was saying to me, “no worries, I will hang on and I won’t let go”.

A few days later when I returned to the emergency room to check on Lucien, I couldn’t find him. My first thought was that he had finally succumb and passed away during the night. And although this is typically how the story ends in this case, God had other plans. Lucien was moved to the malnutrition room. I found him upstairs this time with his mother next to him. He grabbed my finger again, “Still holding on”.

Above the children’s bed are boards with each patients name and date of birth, Lucien: Dec 25th 2014. Born on Christmas day. Lucien, the boy who was saved both physically and spiritually by water, who had no bed in our ER upon arrival, whose very life is a miracle shares a birthday with Jesus.

A few weeks passed by without seeing the father, so I asked about him and was told by Lucien’s mother that when he found out that Lucien was diagnosed with a chronic disease on top of the malnutrition, he disappeared. She almost did the same. Our social service staff was able to convince her to stay and they placed her and Lucien in our follow up clinic. Still, they had nowhere to go to live. The father could not be contacted and Lucien’s grandmother (his mother’s mother) didn’t want to accept her daughter. In part because of the illness and also because she already cares for a four year old boy that her daughter conceived with another man in another similar situation. She was disappointed with her daughter and also considered Lucien as “a curse”. It seemed as the “no place for them in the inn” and the story was back again (cfr Luke 2:7).

On October 28th, the feast of St. Jude apostle, together with the Missionaries of Charity, we decided to go visit the grandmother and try to convince her to accept her daughter and Lucien, by promising to provide food and possibly some kind of job to help sustain them. I sent requests to many of my friends at NPH requesting prayer and asking for the intercession of the Holy Family and of St. Jude, hoping the grandmother would understand like St. Joseph did in his dream (cfr Mt 1:20), that Lucien is not cursed at all, that he has no fault in all this and that he is actually blessed because God has already saved his life. We wanted her to see that Lucien is a blessing, and that his life is a miracle, and that God cares for him very much.

On November 3th, Sr. Dominica, of the Missionaries of Charity, was able to meet Lucien’s grandmother who, after a long dialogue, accepted to welcome her daughter and grandson despite some financial and cultural issues. Lucien had improved so much in the last two months and now he is at home. Once a month, he and his mother will come to the hospital for follow up appointments with the clinic. We will also help the family by giving them a small business selling our chickens and tilapia fish produced by the St. Luke Foundation for Haiti. As you can see, your support is so important for us. Through it we are able to do outreach, to offer healthcare, education, water and food, and to help create jobs. All of these things allow people to live with dignity and change the trajectory of their lives.

In total, Lucien spent 57 days at St. Damien. He is a very blessed boy and I wish to express together with Fr. Rick and Lucien’s mother our gratitude for your prayers. Thank you all and please continue to pray for Lucien and his family, but especially for the so many other children and women, like Lucien and his mother, who are struggling to survive and searching for an extended hand or finger to hold on to. God bless you all and may we always make space in our hearts to welcome the child Jesus.

St. Damien treated over 360 children with severe malnutrition in 2015. Every donation that St. Damien receives helps to give life-saving medical care to those most in need. To help make a difference visit St. Damien Project 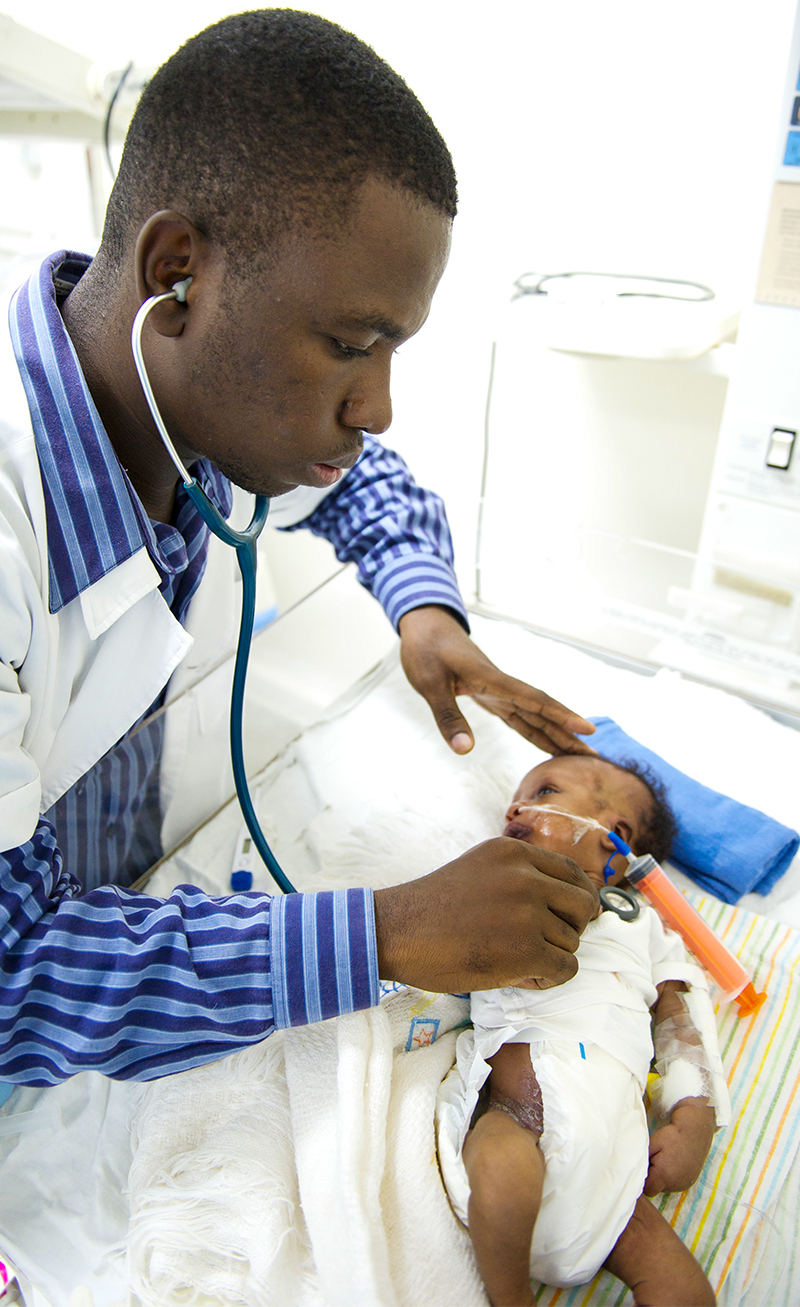